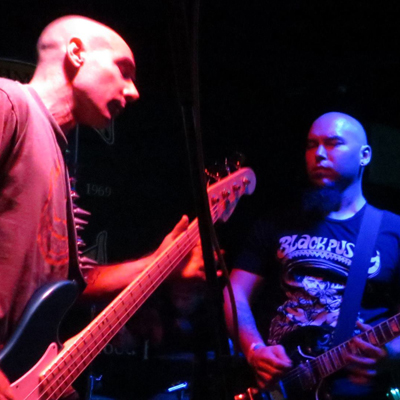 You Know Who – psyche-prog-punk rock by a powerhouse trio consisting of Mike Pygmie (Nick Oliveri’s Uncontrollable / The Wizzards), Dylan Brown (Crackpot) and Greg Saenz (The Dwarves) who replaced Rob Peterson (The Sort of Quartet/the Pedestrians), one of the desert’s most sought after drummers and percussionists. Founding member and multi-instrumentalist Mike Pygmie​ created a platform to articulate hard-edged complex song ideas with searing guitar riffs resulting in blistering compositions.  The rhythm section is a decathlon of heavy bass progressions synced precisely with the imperious understructure laid by drummer Greg Saenz​. The live set showcases three impeccable musicians that deliver the goods. Their debut record doesn’t have a sleeper in the bunch and is slated for release in the summer of 2015 on Self Destructo Records.