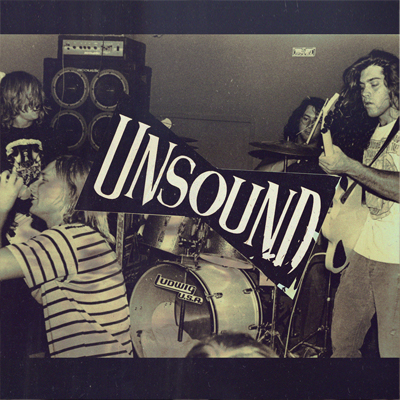 Unsound – played every hidden venue in the desert from the Nude Bowl to The Iron Gate. Pure, raw garage punk by players fully committed to creating chaos with music. They were known for wild performances and unrelenting progressions. The band featured vocalist and frontman Ian Taylor known for his spastic stage antics, spewing barbarous lyrics at a mile a minute, often writhing around on the floor…or sand, Brian Maloney who is revered for his manic guitar riffs, dirty distorted guitar tones,and gripping solos, and a thrashing rhythm section formed by drummer Tony Brown Diprima and bassist Britt Killen. The live shows were riotous and at the heart of the desert’s underground. They released 3 recordings, 2 on cassette and a 3rd recorded with Scott Reeder called “No Choice”. Additionally a 7″ EP called “Melt” was recorded at Epitaph Studios “West Each” in LA. Several years ago a 20 song CD was compiled and put out locally at The Record Alley. Tony left after the first record and was replaced by Jeff Bowman (Nick Oliveri’s Uncontrollable/Waxy). They celebrated 20-years together with a live show in 2010 and shortly after, Killen passed away. Since his untimely passing, the band plays only on occasion using bassist Billy Cordell (Yawning Man, Vista Chino). Ian Taylor said this about future Unsound shows. “We get together to play every few years, but since we lost Britt, we try to just do shows that are important or special to us.”