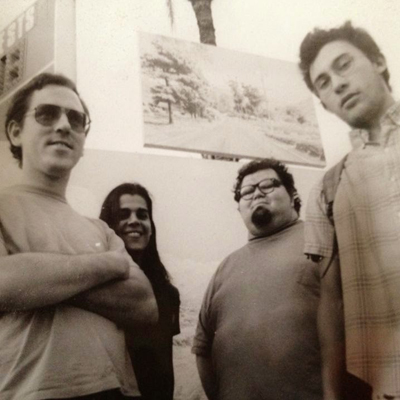 Sort Of Quartet (The)

Sort Of Quartet (The) – Jazz, fusion, and punk collide within the music of the SOQ, a band WAY ahead of their time featuring Gary Arce, Mario Lalli, Larry Lalli, Alfredo Hernandez later replaced by Rob Peterson. The group evolved from the remnants of Yawning Man whose first jams took place in ’86. What started out as stoner rock space jams took a twist when they began playing with odd time signatures and stringing dissonant notes together creating complicated pieces and performing them with an energy equal to hardcore punk. They baffled and astonished audiences with the level of musicianship they brought to the table. They recorded 3 records on the SST label, “Planet Mamon”, “Kiss Me Twice I’m Schizo”, and “Bombas de Amor”. They released a fourth record on German label, Hot Wax Crippled Dick, “Victim A la Mode” which featured Mike Keneally from Frank Zappa. When Peterson went away to school the band drifted off into the musical memories of the desert’s sorted yet inspired past, paving the way for the next Lalli project, Fatso Jetson.