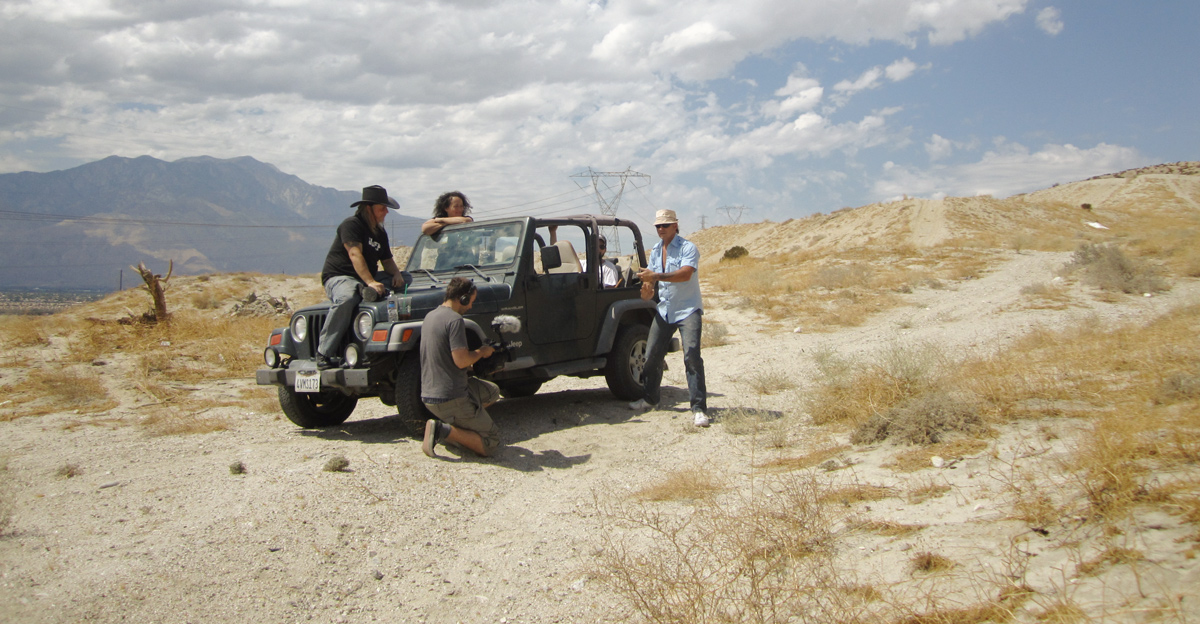 With the same autonomy that was inherent to this scene, its story has been portrayed: Lo Sound Desert was self-financed for good reasons – above all to authentically reflect the scene’s own approach. This inevitably led to setbacks, financial bottlenecks and difficult research conditions.
Now, after 10 years of production, the film is finally what it was intended to be – an intimate insight into a unique music scene, that is framed and coloured by a very unusual environment.

When the production started in mid 2005 the term desert rock was rarely mentioned. It began with a music video shoot for a local band from Palm Desert, later it turned into the production of a short documentary, before it went full-length on a topic that had never been told before.

In 2011 the main part of the documentary was shot in the Coachella Valley.

Lo Sound Desert isn’t Steineck’s first documentary release. In 2008 he released a film called “Welcome To Tijuana”, a documentary about the South-American refugee crisis. In 2011 he and a friend, Christian Maciejewski, brought out a full-lenght documentary (the “Fuzzomentary”) about the band Truckfighters, which had a huge part on kicking off the bands fame – not so much because of the film itself – even though it’s pretty unique and unambiguously funny, it still remained kind of underground to this day. It was the trailer, in which Josh Homme revealed his true musical influences (“Truckfighters” …), which caused confusion and excitement simultaneously among Truckfighters fans.

“The Fuzzomentary was a byproduct of Lo Sound Desert. When the film’s production got stuck because of right issues, we decided to make some fun film. It’s nothing existential and it was just intended to be more of a weird satire than a real band documentary. Whether the world needs it or not, we had a good time making it. And you can see this. But I guess that’s also why the majority of their fans never cared too much about it.”

There are a few projects in the making, like his animation project “Moais” (including voices of some of the interviewees of Lo Sound Desert) and then a short film based on a musican from Los Angeles. “But next to making films I’ll definitely try to concentrate more on painting in the future.” Steinecks portfolio: www.joerg-steineck.com